In Brussels, as the Christmas lights twinkle among the sunset of the Christmas markets, the dust settles on the major terrorist attacks of the past eighteen months. Over a year since the Paris attacks, and six months since the Nice attacks, the aftershocks continue to run through the European tourism industry.

Owner of several small tourist accommodations in Brussels, Dimitri, who would like his identity to remain anonymous, saw the impact firsthand.

“The attacks in Paris in November 2015 had a more negative impact on our business than the Brussels attack. Once it was known the terrorists had roots in Brussels, almost all guests cancelled. As November and December are top months for us, it was a disaster. A lot of hotels and apartments suffered enormously under it and the government did almost nothing to help the tourist business”.

Brussels, capital of the European Union, continues to suffer with a loss of 13-14 percent of revenue predicted by the end of the year. In Paris, tourism fell 13 percent for the year 2016, equating to a loss of approximately €1 Billion each month. Hotels have had to react drastically, slicing rates by up to 56 percent to entice tourists back into the city. In Nice, a 45 percent fall in revenue was experienced in the two weeks immediately following the Promenade des Anglais incident on Bastille Day this year.

At the recent annual European Tourism Day in Brussels, CEO of Visit Flanders and President of the European Travel Commission Peter De Wilde called for a new promotion of Europe as a single destination, instead of individual states. The European economy currently relies on €420 billion each year from tourism, and 24 million jobs, designating it an area that needs to be protected. However, despite terrorism being such a large issue in Europe, the conference event purposely advised its speakers to avoid the topic. “We have had our bad luck this year with terrorist attacks, I am not supposed to mention it, but I am again” Peter De Wilde admitted in his speech “When people hear these [terrorist attacks] are happening in China or in the United States, it always reflects on the whole continent.”

Tensions have again been increased with a warning issued by the US State Department issuing a travel warning to its citizens visiting Europe over the Christmas period. The alert is based upon “credible information” that suggests ISIL and al-Qa’ida “continue to plan terrorist attacks in Europe, with a focus on the upcoming holiday season and associated events”. It suggests caution for its citizens when attending large events, visiting tourist sites, or using public transportation.

However, CEO of tourism and convention bureau Visit Brussels Patrick Bontinck dismisses these threats, and voices his upset that the alert was issued. “In the morning they say that the Christmas markets were not safe in Europe. In the afternoon there were people arrested for plotting a truck attack in Times Square in New York”.

The questions remains as to how directly affected and neighbouring cities can revitalise their tourism industry post-attack. Senior Lecturer in Tourism at the University of Technology Sydney David Beirman argues that there are three main steps that need to be undertaken.

The second part relies on owning up to the issue. “A terrorist attack occurs, and everyone ducks for cover, they don’t say anything, they just pretend that it’s not there, and that’s the worst way, you really have to own up to the problem” Beirman suggests.

Finally, a country must point out they are changing the security arrangements for tourists in that country.

“Tourists are a very popular target for terrorists. If you attack a group of international visitors that attack becomes a headline in every country where one of the victims happens to be a citizen” Beirman said.

CEO of Tourism Competitive Intelligence (TCI) Research Olivier Henry-Biabauds says his firm measures three levels of impact of terrorism: immediate cancellations in the first days and weeks, drops of visitation in the following months of visitors who considered but ultimately rejected the city, and the impact of resilience or “image recovery” over the next 1-2 years.

However, recovery is only possible if no other event happens in the meantime, he cautions.

“We estimate that two years without any event is a necessary period for recovering its good image. But if you have another attack in the same year, this requires at least two additional years.”

“The feeling of safety has become the highest influencing factor in recommending a destination to friends and relatives, making safety more important than the quality of accommodation, cultural visits, shopping or food” he continued.

The importance of terrorism is reflected in the affected states throwing money into the industry. For France, revitalisation was announced in a €23m plan starting this month with a range of elements: English lessons for taxi drivers and hospitality staff, implementing “tourism volunteers” acting as helpers at key sites in the city, the introduction of mobile police stations, and a renaming of ‘state of emergency’ to ‘state of high security’. 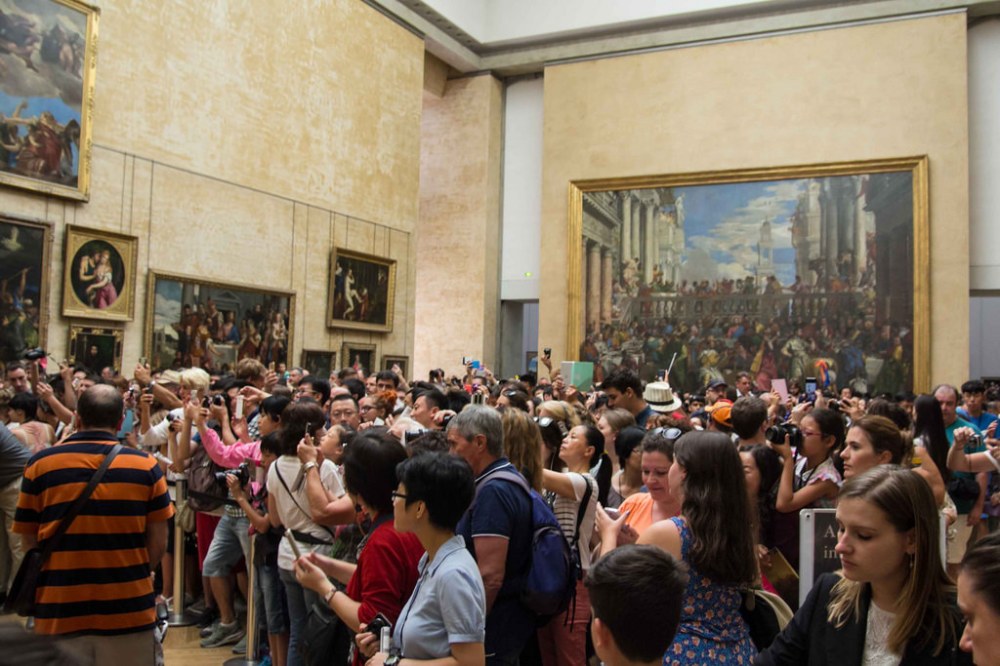 With the security measures the French hope to combat the falling tourist numbers in the region. Speaking to Journal du Dimanche, President of the Ile-de-France region Valérie Pécresse said: “We are going through an extremely difficult period, marked by terrorist attacks”.

For Australian tourist Claire York, when travelling in the Paris and Nice areas last month, security was of a higher concern prior to arrival than when she explored the regions.

“I felt completely safe, had no issues walking the streets at night or venturing to the high tourist areas including the Eiffel Tower, Moulin Rouge and Euro Disneyland” she said, but noted the security measures were apparent.

“A lot of police and military personnel walking the streets with rifles made me feel uneasy but still not worried. I’m only used to seeing guns like that hunting animals. Also security checks entering places like the museums and the Eiffel Tower. It doesn’t take long to become used to it.”

In Brussels, a similar image is present. As tourists and locals step off trains, they are greeted on the platforms by the stern faces of armed soldiers. Amid the festive Christmas decorations, market stalls, and fairy lights, the streets are patrolled by camouflaged military, FNC assault rifles swinging from their shoulders, a less-than candid reminder of the events of March 22nd.

“The decision to put the military in the streets can be justified for a short period, but not for a long one. You can put so many military in the streets, you cannot guarantee this will keep people safe” Patrick Bontinck, CEO of Visit Brussels argues, comparing the situation to New York where no special measurements were taken following the recent foiled attack.

“But on the long-term basis, we know and everybody knows that the only way to fight against terrorism is to arrest the people. It’s always difficult to say what we have to do to make the people safer”.

David Bierman, UTS Senior Tourism Lecturer, argues that tourists and locals want to see that the government is doing something. “If you see people with guns, that’s not going to put off the terrorists” he said. But, covert security utilising technology to screen and scan people non-invasively, is the most important, he argues.

However, the image of unrelenting uniformed soldiers parting crowds at the Christmas markets, rifles at the ready, among cheerful sounds of laughter, and the smells of waffles and cheap mulled wine, is a juxtaposition that would be almost comical, if it weren’t a reminder of the exact opposite.

Tourism Brussels recently closed tenders for a new International Image Campaign to reignite the tourism sector by promoting the strengths of the Brussels region. Two plans will be launched in early 2017: one for the Brussels region of €4m, and another for the federal state of Belgium of €5m aiming to recover the positive image of Belgium. The successful tenders will be announced at a later date.

According to Bontinck, it is not only individuals cancelling trips, but tour carriers are also at fault, particularly following the Nice attacks. “Those tourists are still not coming back after six months. The same situation is in Paris and in all other cities in Europe.” 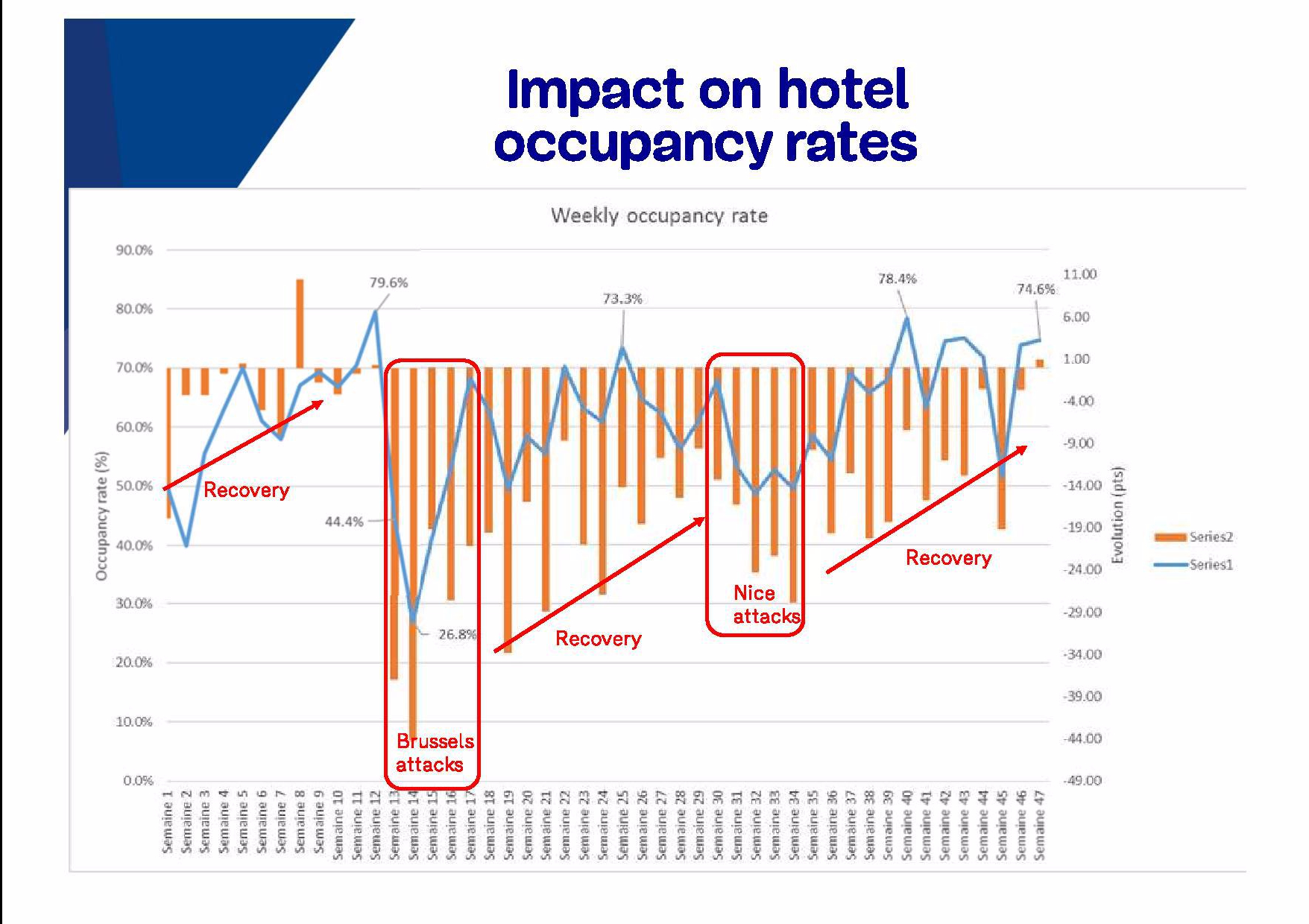 The attacks in both France and Belgium can be traced in Brussels hotel occupancy. Source: Visit Brussels

The 2016 Summer government tourism campaign for Brussels saw success, with a priority on keeping congresses and events in Brussels, forming partnerships with various airlines, train companies, and online booking portals.

Clearing out of the smoke is the support of the community in Brussels, demonstrated through the Sprout to Be Brussels campaign. With more than one-hundred partners, the plan renews forgotten places in Brussels utilising sustainable street art, planting giant brussels sprouts in iconic locations, and utilising Sprout stickers and social media to grow the message.

Coordinator of the movement, Cedric Swaelens praised the campaign in a press release: “the power of the #sprouttobebrussels movement comes from having rapidly welcomed into its missions partners from all the major sectors in Brussels […] This is a first.”

But for Bontinck, security will no longer be the prime focus. “If you want to give reason to the terrorists to attack, stop travelling. If you don’t want to give a reason, continue travelling as before”.